In the last couple of years, Virtual Reality (VR) and Augmented Reality (AR) technologies have come forward to become the next big computing platforms.  These technologies are expected to create new markets while disrupting the existing ones, similar to the PC and smartphone wave witnessed during the last decade.

VR is a computer technology that creates a virtual/artificial environment and simulates users’ presence in a way that allows users to interact with it.  On the other hand, AR make use of VR and real life to create an environment which features elements that are augmented/supplemented by a computer generated sensory input such as video, graphics, sound, and/or GPS data.

Even though purpose of VR and AR are similar in a way that both are developed to immerse the user in a virtual environment, there’s one striking difference among them.  While using AR, users experience a blended environment i.e., users maintain contact with real world despite interacting with virtual objects around them.  In comparison, VR isolates the users from the real world and immerse them into a completely virtual/fabricated world.

In 2015, the US-based full investment service company, Piper Jaffray, issued a report – “The Next Mega Tech Theme is Virtual Reality” – claiming that VR and AR will drive the next mega tech trend through 2030.  The report also pointed out that VR will be first phase of the development, while the AR is expected to be the second phase.

In addition, Credit Suisse analysts – Uwe Neumann and Ulrich Kaiser – stated in their report that VR and AR technologies are expected to witness a boom in the market, like that of the smartphone market during last decade.  The global market is estimated is to grow at a Compounded Annual Growth Rate (CAGR) of 112.3% to reach US$162.5 billion by 2020.  The following figure depicts the estimated growth in the AR and VR market from 2016 to 2020. 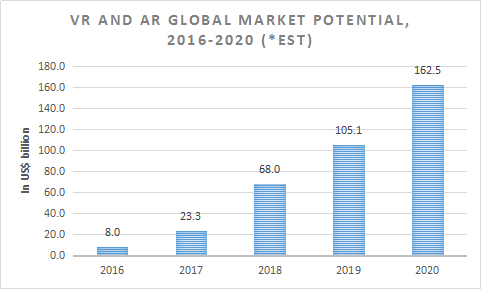 In February 2016, Gartner, a leading market research firm, estimated the units of VR and AR hardware sold will increase significantly from just 140,000 units in 2015 to 1,400,000 (1.4 million) units by the end of 2016.  The firm further suggested that this trend is expected to continue in 2017, with estimated VR and AR hardware units sold to reach 6.3 million.  This is in line with expectations among global experts that AR and VR will experience greater business implementation.  The following figure depicts the progression in end-use applications of AR and VR technologies from 2016 to 2023. 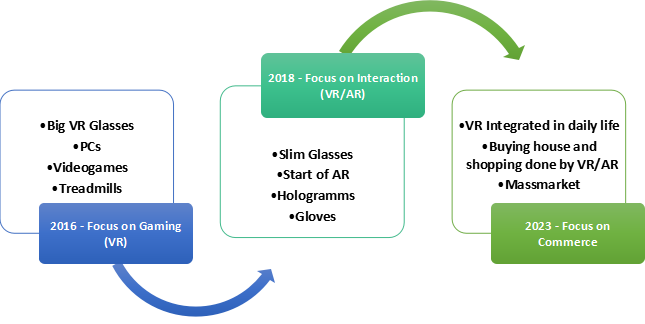 At present, the market for AR and VR is mainly dominated by entertainment industry, in particularly from the video game industry.  In 2016, products including HTC Vibe, the Oculus Rift, and PlayStation VR were launched to exploit the growing market.  However, by 2025, the market landscape is expected to change even for the software end-use application segment, as implementation of these technologies expands to include business aspects.  The following chart represents a market breakdown of VR and AR technology in software segment by end-use industry application by 2025. 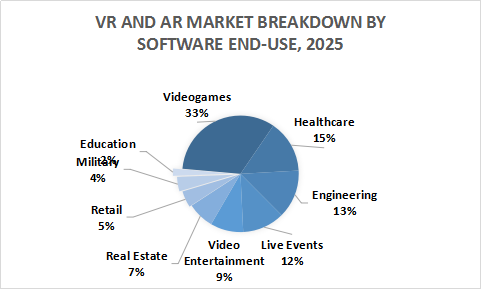 Both AR and VR hold a huge market potential.  It is the primary reason why the investors – Google, Microsoft, and Facebook, among others – have invested heavily in these technologies in the recent past.  However, as the time progresses, AR is expected to achieve greater commercial success globally.  This is primarily due to AR’s ability to blend components of VR with the real world, essentially providing a contextually enhanced view.