Cashless economy refers to an economy in which flow of cash takes place through digital modes of transactions including credit and debit cards, instead of cash.  This also include electronic transfer technology methods such as IMPS, NEFT and REGT, and Mobile wallets.

While there are several benefits of being a cashless economy, some experts reckon that cash could never be fully eliminated as a mode of transaction in a society.  The primary reason is that cash instills confidence among consumers and ensures they are not bound to banks and other commercial businesses for every transaction.  While others (mostly people with financial background including co-CEO of Deutsche Bank AG – John Cryan) claim that cash will be gone within a decade, and is “terribly inefficient”.  The figures below list out pros and cons to both a cashless economy and to a cash-backed economy. 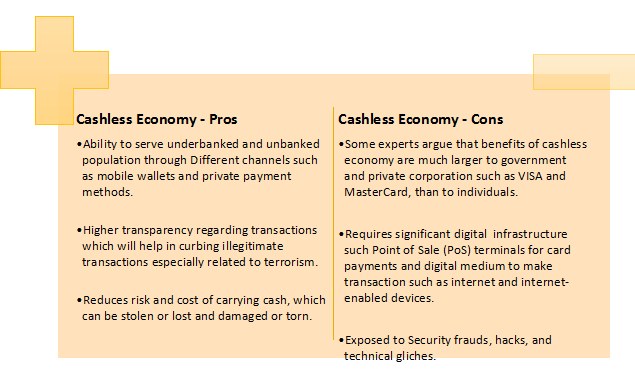 There’s no denying that cashless economy has manifold benefits.  However, as many experts have argued that government and private companies share of benefits exceed largely than that of individuals.  Most importantly, the notion and benefits of cashless society are heavily perpetuated by banks, card companies, and other electronic payment service providers.  Evidently, since these entities stand to directly benefit from the “cashless economy” movement.

Because for every transaction and use of POS terminals and cards, these entities levy charges on merchants which are essentially passed on to the consumers in form of higher prices.  In India, cost to merchants for using a mobile Point of Sale (POS) terminal is around INR 150 per month.  In addition, for every transaction of more than INR 2,000, the merchant discount rate of 1% is levied which shows the share of the bank and other players.  Whereas, for transactions less than INR 2,000, the merchant discounts of 0.75% is levied.

In addition, these entities charge annual service fees from consumers for providing services such as internet banking, usage of credit and debit cards and mobile banking.  Moreover, several studies have indicated that credit cards are by far the most expensive method of transaction to both merchants and consumers. Moreover, there are other issues with cash-less economies such as security frauds, technical glitches, and other technological failures. 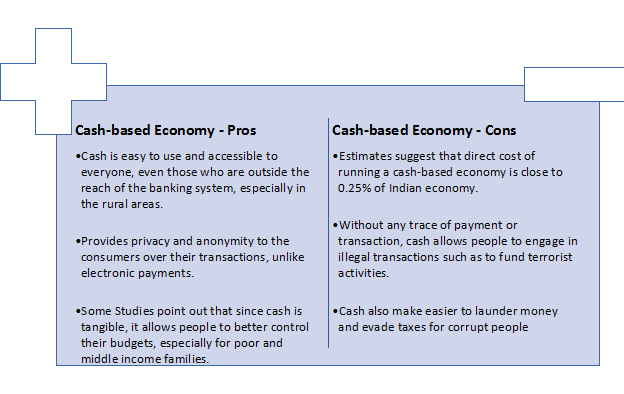 In comparison, running a cash-based economy also has some negative financial implications to an economy.  Printing money and then distributing the same across the country has massive cost to the central bank.  According to market research, in India, cost of printing money in 2013-14 was estimated to be INR 32.1 billion.  In addition, adding and maintenance of ATMs cost around INR 15.2 billion per year to the banks.

Some estimates suggest that direct cost of running a cash-based economy is around 0.25% of India’s Gross Domestic Product (GDP).  Moreover, there are other problems with cash-based economy such as corruption, money laundering, and tax evasion since cash-based transactions are not easily traceable.

Each method of payment has its benefits, along with inconveniences.  Even though several bureaucrats and executives of global corporations are claiming that “future is cash-less”, it is each consumers’ fundamental right to choose whichever mode of transaction suits his or her purpose.  In addition, getting rid of cash will essentially create a “power block” which will be controlled by such corporations and financial providers.  So, it will be beneficial to allow different modes of transactions to co-exist to satisfy consumer preferences.  And even if the future is cash-less, then it should be up to the consumers to choose.  Since it will be unfair to point out the cost and inconvenience associated with one kind of payment method, while ignoring such issues associated with the others.