China is the world’s largest crude steel producer in 2018, followed by India, Japan, and the US.  The following figure depicts the total market share in Crude and finished steel as per the research report. 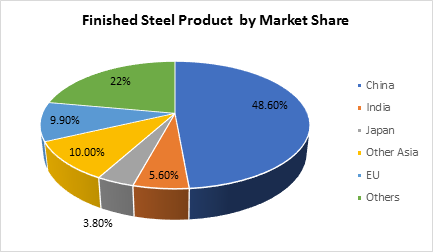 India is the second-largest steel manufacturer in World, with a total, finished steel production accounts to 126.85 MT (million tons) in 2018 from 58.9MT in 2008.  The steel sector has been a major contributor to the country’s manufacturing output.

The availability of low-cost labor and the presence of abundant iron ore reserves make India competitive in global set up.  The steel sector contributes to 2% of GDP, and it employs 5 lakh people directly and 25 lakhs people indirectly.  The per capita consumption of steel grew at a CAGR of 3.96% from 45KG in 2008 to 69KG in 2019.  India is also the largest producer of sponge iron or DRI in the world, the coal-based route accounted for 79% of total sponge iron production (30.51 mt) in the country in 2017-18.

The finished steel consumption in India will increase by 230MT by 2030-31 from 90.68 MT in 2018 mostly due to the growth in demand in the domestic market.  National steel policy -2017 has been implemented to encourage the industry to reach the global benchmark and allowing 100% FDI in the steel sector under the automatic route.  An export duty if 30% has been imposed on iron ore to increase the steel production in the state.  Currently, there is 18% GST applicable to steel and there is no export duty on steel items.