Trademark generally refers to a “brand” or “logo” in common man language.  Trademark registration can be done for a business name, distinctive catch phrases, taglines or captions to secure business interests.   Once you use it promote properly it can become the most valuable asset of a business. Trademarks such as Coca Cola, HP, Canon, Nike and Adidas serve as an indication of origin of the goods as well as an indication of quality.

A trademark can be a symbol, design or word that represents the brand name, products and/or services of a business.  There are around 43.2 million active trademarks registered at 130 offices worldwide till 2017, which is 9.7% more than that of 2016. 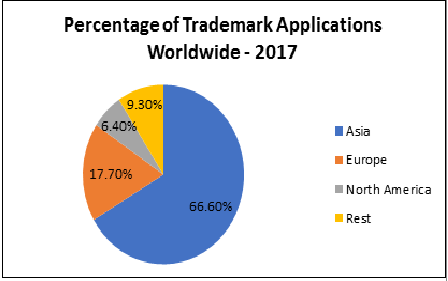 Out of 9.11 million trademarks, 5.45 million were registered in 2017 which is 18.2%, or 836,500 additional registrations, as compare to the data of 2016.  Agriculture, research and technology, business services and clothing were accounted to 13% to 18% of globally reported trademark filling activity in the year 2017.

In India, the trademark law statutorily protects trademarks as per the Trademark Act, 1999.  The Statutory protection of trademark is administered by the Controller General of Patents, Designs and Trade Marks, a government agency which reports to the Department of Industrial Policy and Promotion (DIPP), under the Ministry of Commerce and Industry.